This course will provide public health professionals, students, Tribes and Tribal-serving organizations with information, tools, and resources on the use and function of Service Animals, Therapy Animals, Emotional Support Animals, and pets. 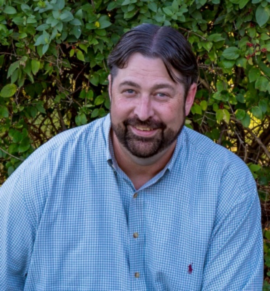 During his time at Northeastern State University he has developed and instructed various courses in Psychology, including: Intro to Psych, Personality Theory, Intro to Human Behavior, Technology-assisted Therapy, Suicide intervention, and Service Animals. Mr. Bywater is also a Supervisor of Behavioral Health Clinical Services at Cherokee Nation Health Services.

Mr. Bywater is trained in the use and practice of Animal-assisted Therapy and has been practicing this fast-growing and popular form of therapy with his clients since 2016.

Mr. Bywater uses a Goldendoodle named “Cotton” in session with clients and has become widely known locally with several news articles of the pair and the evidence-based work that they provide to the community.

Cotton the Therapy Dog is a Goldendoodle who also works as a Service Dog for James. He has a disability and she is able to provide a service directly related to it.

As a Therapy Dog she works weekly as part of an Animal-Assisted Therapy Team with her handler James Bywater, MS, LPC-S, NCC.

Cotton is very active in advocating for and educating the public and professionals on topics related to Service Animals, Emotional Support Animals, and Therapy Animals.

Cotton travels often and has presented at many seminars and professional conferences throughout the United States.